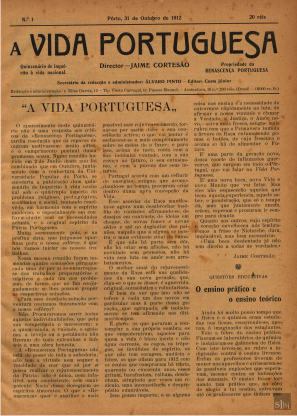 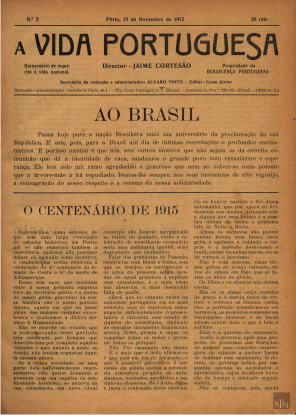 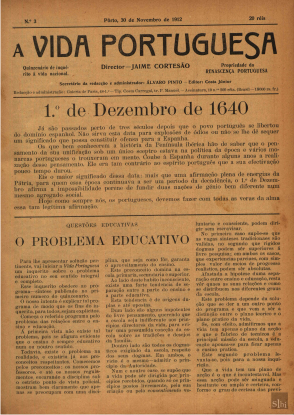 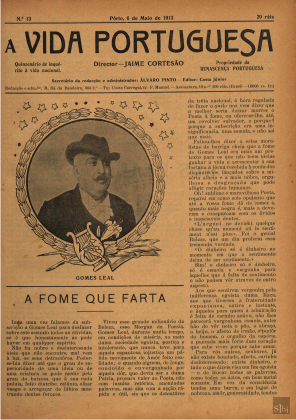 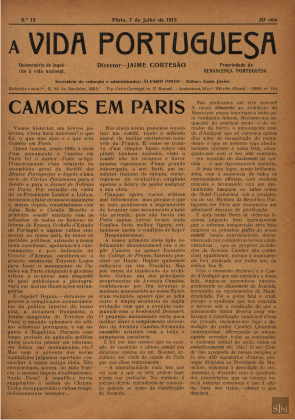 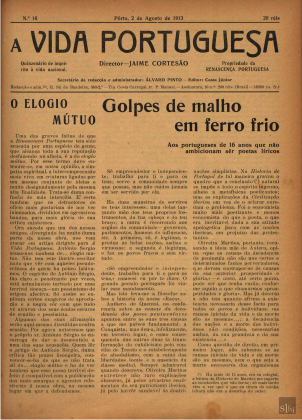 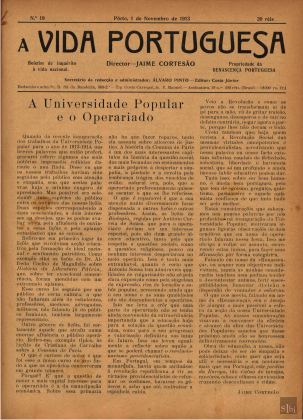 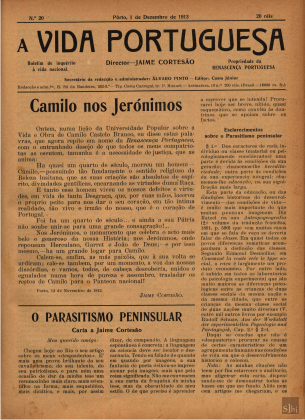 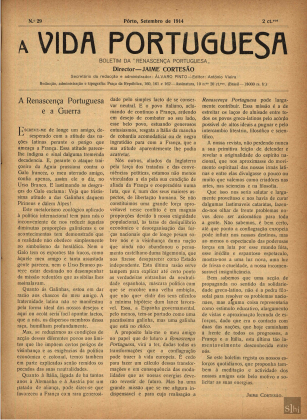 A Vida Portuguesa, quinzenário de inquérito à vida nacional, published between October 1912 and November 1915, carried a generic, yet uncommonly appropriate, title in view of its unequivocal dedication to higher matters of national import and to the civic and practical programme of collective resurgence.

Jaime Cortesão – director, Álvaro Pinto – office secretary and administrator, Costa Júnior – editor, and the Sociedade Renascença Portuguesa – proprietor, meticulously registered in this periodical bulletin the goals, the composition, the organs, and the important initiatives that defined the raison d'être and determined the course of their common work.

Even though the achieved repository – in itself, a true self-portrait of the most representative civic movement of men of letters, sciences, and arts of the Republic's first decade – shows a diversified composition, we can observe it from the perspective of three fundamental axes, which, in fact, coincide with regular sections found in the publication: self-legitimization; the inquiry into the nation's reality; and the labour of cultural diffusion.

Their authority stemmed from the enlightened acknowledgement of the nature and the destiny of the Portuguese condition, of which the periodical's authors took on the role of heralds. Among their core beliefs the classical and ritual notion of renaissance prevailed: a return to the national origins, to the primordial and genuine nature, supported by the anthropological idea of race, was paramount, since the only path to vanquish secular heteronomy and decadence, to fulfil contemporary Portugal, to glimpse plenitude as an answer to this reflexive edenic call, was by re-entering the intimacy of the source.

The assumption that a new collective ideal, coalescent of the national rebirth movement, had to forcibly plunge its roots in the past and in the renewal of historical studies was often made, notably by Jaime Cortesão. Notwithstanding, it should be noted that in A Vida Portuguesa the evocation of nationalist mythemes was infrequent and residual. At the same time, the cultural diffusion powered by the fortnightly publication spanned the entirety of contemporary knowledge, taking on a universal perspective. National history and literature were emphasized, but the prevalent broadness of spirit greatly exceeded them.

It was in this national-scale opening up to different perspectives that the regular participation of thinkers who shared the primacy of culture among public causes while simultaneously contrasting the window of cosmopolitanism to the lesson of nationalism, and conceptual debate with poetic prophecy, found the space to not only consolidate this implicit affinity, but also to polemize on the doctrinarian perspectives and contents of its fulfilment, and to anticipate future encounters, notably Cortesão, Sérgio, and Proença's seareira collaboration, and the publication of the ephemeral and renascentista magazine Princípio.

What motivated most of these young poets and thinkers was an intellectual and republican ethic that united knowledge and duty. It was up to them to reprise the contemporary mission of promoting the nation's coming together again with itself and with its time, and so to provide the supreme common good of enlightened, cohesive, and fecund self-determination. This was a purpose that required not only the democratic obligation of culturally elucidating and promoting the community, seen as a fundamental condition for cultivating an emancipated and industrious citizenry, but also taking up positions with regards to major collective – and even civilizational – challenges, of which the question of participation in the Great War immediately stood out.

It should be noted that the Renascença Portuguesa shone on its own in interpreting the status attributed to the cultivated and committed men who intervened in the city, in accordance with their self-defined purview. This scope rose above the constraints and vicissitudes of power, even when viewed with the benevolence of those who sympathized with the young republican order.

We need only remind ourselves of the consequences of the Dreyfus affair, decisive in early 20th-century political culture, and the encouragement it provided to cultivated civic endeavours. This could be seen, for example, in the proliferation of popular universities in France, and Europe in general, so dear to the young renascentistas, and confirmed both the positive acceptance of the imperatives given to the representatives of knowledge and the means intended to fulfil them. The only reason the expectation – present in numerous background articles featured in the publication – that popular universities would turn into sought-after initiatives and attract the working class does not constitute a fanciful folly is because it is based on their success in France, where a good half of the unionized population attended.

However, let us return to the A Vida Portuguesa bulletin and its initial subtitle, so as to observe the general sense of the cultural initiatives with which the Renascença Portuguesa sought to achieve its statutory goals.

When A Vida Portuguesa features the subtitle quinzenário de inquérito à vida nacional, it marks the objective of introducing method in the diagnostic, the debate, and the definition of rationally supported solutions that are capable of answering the major problems facing the national community, in light of constituted and pertinent knowledge.

In fact, the initial and explicit purpose of the publication was to conduct four surveys on religious, educational, social, and economical problems, branching out into a great number of clear academically-enunciated questions. They would each be considered by its own specific commission, composed of twelve high-ranking members and associates of the Renascença Portuguesa.

Relatively extensive analyses were dedicated to economic issues, such as emigration, industry, agriculture, the Leixões port, among others. The educational problem also received regular considerations, on such topics as the popular universities, university education, theoretical and practical education, learning manuals, and child education. In contrast, the social and religious areas were not afforded any special attention.

A special note must also be made regarding the sizeable collection of popular science articles featured in the magazine – since the publication was not confined to its role as a bulletin – many of which offering practical applications, mostly in the field of prophylactic care.

On the subject of specialized knowledge on the Portuguese context, the quality and quantity of results proved widely variable, even taking into account other contributions on converging topics. However, the activities devoted to the diffusion of knowledge and the arts were very intensive, a fact expressed not only through the courses taught at the popular universities, but also via the editorial arena and, even, the organization of conferences, concerts, and exhibitions.

The creation of popular universities represented the first major cultural promotion initiative of the Renascença Portuguesa, excluding the publication of A Águia, the movement's official organ since January 1912.

Jaime Cortesão dedicated over a dozen articles to the history, justification, and purposes of these informal popular education universities, while simultaneously insisting on the need to direct them, domestically, at the entirety of the population – the ignorance among university degree-holders and the prevalent cultural unpreparedness were the reasons for this ambition. The working class was obviously included – some receptivity to the topics surrounding its emancipation was to be noted, such as in the case of the Paris Commune course taught by Cristiano Carvalho, in contrast with the rejection of talks on more mundane subjects, which were often copied from the official school system.

As part of its mission, A Vida Portuguesa provided detailed news of these events. It also reproduced both the programmes of the courses and the summaries of some sessions, allowing a precise reconstruction of contents of the humanistic, scientific, artistic, and technic culture included in them, a natural result of the compromise between stated goals and available good-will.

The figures mobilized for teaching these courses were undeniably of solid reputation and variety in interests; the results they achieved, however, are more difficult to evaluate. In any case, the regular functioning of the Popular University of Porto stands in contrast with the very sporadic educational offers of the remaining three.

Another field of notable intervention on the part of the Renascença Portuguesa was its intensive editorial production, seen firstly in the announcements of titles authored by its members, and, secondly, in the creation of collections including specific coordinators, topics, and publishing agendas. The final pages of each issue were dedicated to announcing the publication of these works.

Looking through the list of published titles we see that their production was always accompanied by a sense of cultural diffusion, in accordance with the movement's general programme orientation, not only by including titles by some of its major figures and close authors, but also by translating important universal works.

The 'Biblioteca Lusitana' collection, directed (together with Jaime Cortesão) and proposed by Alfredo Coelho de Magalhães in a talk at the Popular University of Porto, intended to encourage reading the national classics, represented the first order of editorial activity – its reception was enthusiastically transcribed, in detail, by A Vida Portuguesa. The 'Biblioteca Infantil e Popular', organized by José Teixeira Rêgo, followed, as did the 'Biblioteca de Educação', of which António Sérgio was in charge. Both of them were also discussed in numerous articles and references featured in the bulletin.

Among the titles published by the Edições Renascença Portuguesa we find Cartilha do Povo, with an official print run of 100 000 copies, a work that intended to achieve nationwide projection for the propaganda in favour of Portuguese participation in the Great War. Support for this tendency was also expressed in several lengthy articles, in addition to the deliberation of the Renascença Portuguesa Administrative Board, included in the bulletin with full first-page honours, which defended the creation of a Military Instruction Society.

While A Águia, despite significant difficulties throughout the year 1916, and its parent association survived the Flanders mobilization, the same cannot be said of A Vida Portuguesa, whose director was among those who volunteered for active military service. Later, the redbeard poet and historian – a public figure of exemplary integrity and courage – gave notice, in the publications of the Renascença Portuguesa, of an experience curtailed both by the final Allied victory and the sidonista contraction. Those were days and circumstances shared with other illustrious brothers in writing and arms, the sons of a 'fighting, original, enthusiastic, and willful' generation, as Cortesão defined it – with undeniable justice – in the very opening editorial of the quinzenário de inquérito à vida nacional.