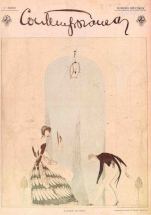 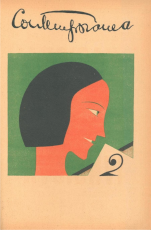 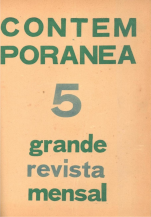 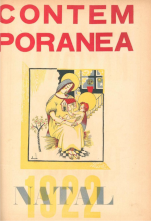 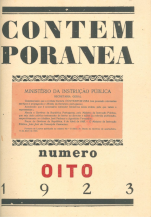 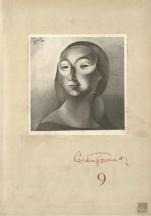 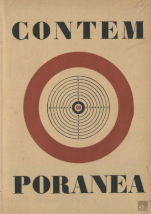 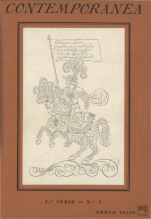 Contemporânea was the work of architect José Pacheco (1885-1934). After publishing a specimen issue in 1915, the magazine showed great regularity between issues 1 and 9, from May 1922 to March 1923, headed by Algarvian businessman Agostinho Fernandes as editor. In 1924 a single issue was published and, the following year, only one supplement. The last three issues appeared in 1926.

Contemporânea was a magazine that wanted to be contemporary with itself. In the opening article, an open letter ‘to an aesthete’, we find an interesting passage that defines the magazine’s direction and largely explains its name: this is not a magazine of futurists, which was taken as a negative epithet, especially for the generation that this ‘aesthete’ represents, but of ‘contemporaries’, young people who belong to their time and who want to promote Portugal.

The specimen number is tripartite, with three different covers (the first and main part by Almada, the other two by Jorge Barradas), and in it the war is featured prominently, a year before Portugal's entry on the Allied side.

Besides the obvious parallel that can be drawn with the scintillating star that was Orpheu, the specimen issue cannot be read without losing sight of another ephemeral publication, a single issue published that same year: Eh Real!, which was more a political pamphlet than a cultural periodical, but that remained relevant because of the inclusion of Pessoa's article ‘O Preconceito da Ordem’.

In this regard, Contemporânea’s photo-report on the laicization of the government is interesting, since it expresses an ideological stance that is diametrically opposed to that of Eh Real!, that is, clearly in favour of Pimenta de Castro’s dictatorship (one of the external reasons for the collapse of José Pacheco’s initial project).

On the other hand, with its long illustration boards, the specimen issue is also reminiscent of the influential variety magazine Ilustração Portuguesa, which featured ‘one of Orpheu's own’, António Ferro, as director in 1921 and 1922.

Mention should also be made of the wide range of themes, one of the periodical’s hallmarks. Women were often taken as subjects, generally from an angle that was opposed to the misogynistic perspective of stay-at-home femininity.

The periodical featured, albeit timidly, the ‘Polemic of the Young’, as it became known. At stake was the renovation of the governing body of the Sociedade Nacional de Belas Artes (SNBA), which was accused of being obsolete and out of touch with contemporary reality. The clash was centred on the SNBA exhibitions and on the purges inflicted on younger artists, who closely followed so-called ‘modernist’ art. The 1925 supplement presented, over several articles, this polemic.

From a graphic point of view, Contemporânea is an emblematic magazine of the twenties, a trait which can be seen even in the ads. Interestingly, at the end of the first series (June 1922), we find a strong and forceful assertion that publicity should not be discarded, as it is also art. The statement is entirely correct if we take into account Almada Negreiros' artistic contribution, also in the field of advertising: see, for example, the ads for Fabrica Suissa chocolates, which, the poster states, ‘are Portuguese’.

In fact, Almada's work was one of Jose Pacheco's main strengths, along with the talents of Bernardo Marques, Eduardo Viana, Jorge Barradas, Stuart Carvalhais (author of many vignettes), and the Spaniard Vázquez Díaz. In the plastic arts, the reproduction of works of art, such as Eduardo Malta’s paintings and Diogo Macedo’s sculptures, is also worth mentioning.

Almada Negreiros’ presence was also felt through his scathing texts (see, for example, ‘O Dinheiro’) oriented toward social subjects, from a critical perspective of monetary capital and its role in classist differentiation. Some of these texts were also precursors of a somewhat post-colonial attitude, as can be seen in ‘O Diamante’.

Mário Saa's eminently autobiographical articles are also testimonies of the best social critique produced by the magazine, in hybrid and truly avant-garde texts.

The presence of António Ferro – who was editor of the second series’ final issue – comes to attention through his frequent collaborations, such as the written review on the debut of the play Mar Alto. In the 1925 supplement, he not only published an article about the new Brazilian generation (following the visit to Brazil where he presented A Idade do Jazz-Band), but was also mentioned and praised in an open letter by Oswald de Andrade.

This supplement is, moreover, a curious case in the magazine’s history. If we look for a snapshot of what was happening in the 1920s, these are the right pages to read. In leafing through the short pamphlet, almost a century later, two articles stand out when trying to understand the period. One is about the new generation in Brazil and the other discusses the European side of the Atlantic. It is, in essence, an interlude while the new issue does not come out (because of the editor's illness, we are told), but one that is very concerned with theorizing the new generation and evoking its dead. An interesting detail is that Fernando Pessoa is omitted from this article, despite having previously written for the magazine, including in French, while the piece exhaustively enumerates the counterparts of his generation.

Despite only truly embracing its hispanophile tendencies in the last series, with the subtitle ‘Portugal * Ibero-Americanism * Art’, from the first issue Contemporânea was a magazine that shared great sympathy for Spanish language and culture and was open to the collaboration of Castillian-language intellectuals, particularly diplomats working in Portugal and those close to them, such as the modernist Ramón Gómez de la Serna. This Portuguese-Hispanic relationship was studied in detail by António Saéz Delgado in an article included in this website.

José Pacheco's illness prevented him from publishing the magazine after 1926. Despite this, his personal document collection provides many clues about his future intentions, including the textual and graphic materials planned for the fourteenth issue of Contemporânea.

In any case, he left us the published and unpublished legacy of his Contemporânea, containing indispensable elements for the study of Portuguese-language Modernism on both sides of the Atlantic.