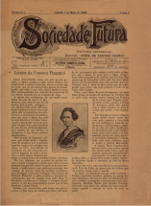 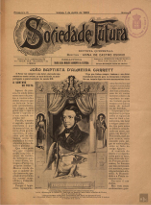 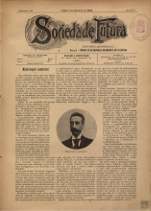 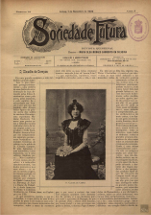 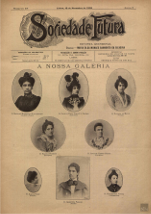 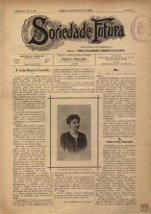 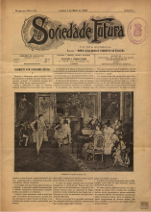 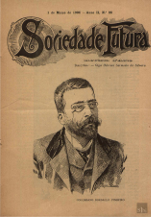 The latter half of the nineteenth century, and especially the years of the twentieth century that preceded the implementation of the republican regime in Portugal, witnessed the increasing publication and dissemination of the periodical feminine and feminist press. Sociedade Futura participated in this editorial process, realising the dream long cherished by its founder Maria Olga de Moraes Sarmento da Silveira, and made possible by husband Manuel João da Silveira, a naval doctor. As she explained in her memoirs, published in old age, the fact that a woman founded a magazine ‘represented not only unbelievable boldness but a dangerous threat of emancipation’. From the first moment, the founder was therefore aware of the reactions that her editorial initiative would provoke, but this did not cause her to abandon an ideal that, in her opinion, was able to project itself through time. She named the publication Sociedade Futura, or Future Society, implying that she believed in the transformative nature of the press, in particular the specialized periodical press.

In this context, and given the lack of further explicit data on more objective details of the editorial process’ complexity, the choice of Ana de Castro Osório as its director should be pointed out. At the time, she was already a prestigious personality, with published works, as was her husband, Paulino de Oliveira, fairly well-known known as a writer and publicist. Although they were positioned in ideologically and politically distinct fields – Olga de Moraes Sarmento was a Monarchist and Ana de Castro Osório a Republican – this separation did not prevent them from joining a common project, perhaps understanding that cultural dissemination and the struggle for dignifying women were above any of their differences. In any case, Castro Osório took on the role of director from the first issue, while Moraes Sarmento remained only as editor, a situation that remained until issue nr. 7. There, a small note warned readers that the director would no longer be part of the editorial team. In the following issue, the director was replaced by the editor, and this was maintained until the final issue.

In the pages of Sociedade Futura nothing is said about the reasons for the confrontation between these two women, who were engaged in a common project of disseminating a culturally-oriented feminism. Regardless, Ana de Castro Osório no longer collaborated in the magazine and the publication apparently continued without difficulties or substantial changes to the objectives of its creation. Personal differences did not shake the project of cultural feminism embodied by the periodical, despite there being no doubt of their existence. In letters addressed to her father, Ana de Castro Osório speaks harshly of her former companion, demonstrating a clear separation. On the other hand, years later, on the occasion of Paulino de Oliveira's death, Olga de Moraes Sarmento, in a letter of condolences, recalls not only the good relations that had existed between the two women, but the circumstances that had driven them apart, calling for reconciliation. As far as we know, this appeal remained unanswered, although at the same time Castro Osório published an open letter, from a Republican to a Monarchist, in the magazine Madrugada. Although there is nothing to confirm that this was a response to the call of a past friendship, the fact that it possibly represents a confluence of distinct political ideologies in a collective struggle is still significant for understanding first-wave feminism.

Few common references were shared by both intellectuals in constructing this magazine’s project. By itself, the name represented hope in a new society that could be enabled by the political moment, but the significance attached to it would differ, given the ideas that each professed in this field. What was at stake was a cultural and humanistic ideal embodied by the emergence of women in the society that would be built, and which Ana de Castro Osório had described, when stating that the purpose of Sociedade Futura would be ‘to popularize knowledge, ideas, and rational principles of education and common sense, thus fighting for the future of our race and our country’. In this way they intended to contribute toward the ‘creation’ of a new society, achieved through a new culture, based on the fundamental value of education, on opening new scientific paths, on knowledge of the arts and letters, for which the role of women would be fundamental, but not unique. Consequently, they published texts by national and foreign authors on these subjects, as well as giving special attention to the dissemination of profiles of women – contemporary or historical, aristocrats or otherwise – clarifying the mission attributed to women alongside men in the construction of a future society. Also significant in this context was the invitation to Virgínia Quaresma as the magazine’s secretary, given her place as a Portuguese professional journalist pioneer, and a staunch defender of women's rights.

Finally, to classify Sociedade Futura as a feminist and feminist magazine, confining it exclusively to identity issues, would perhaps minimize the much more comprehensive role the two editors had in mind. They sought, rather, the global and humanistic appreciation of women, a fundamental step to occupy their rightful place as an integral part of society. In this process, as already mentioned, education played a primordial role, because in it alone could be found the genesis of culture as a vector of equality between men and women. This would be the general sense of the various subjects that were discussed throughout the publication, which covered, at least in theory, all fields of human action, all human beings: pedagogy and literature, arts and letters, music and painting, history and philosophy, traditions and customs, personalities and presences, etc.

Note – Issue nr. 21-22 of Sociedade Futura, from April 1903, is not reproduced since it could not be found in the many public and private libraries consulted for this purpose. The Seminário Livre de História das Ideias welcomes any information that can help to overcome this fault.